Latest draft of my Interbellum rules is now available

After a few struggles and diversions along the way, I have finally managed to complete the latest draft of my INTERBELLUM rules, and they are available in PDF format as a download from my Interbellum website.

The rules do incorporate some ideas from my previous rules, WHEN EMPIRES CLASH!. In particular there are now rules for the use of Transport Units as well as a whole new section at the end that sets out rules for the use of aircraft over the battlefield. The rules have yet to be play-tested (or even properly proof read!), but I set myself the goal of finishing the draft today ... and managed it!
Posted by Robert (Bob) Cordery at 18:04 No comments:


No pics but they should be perfect for 'Bolkans' imagi-wars whether as regular or irregular forces.

Cheers
Mark
Posted by Mark at 10:39 No comments:

More truth from THE TRUTH?

Further to their recent revelations, THE TRUTH has published more images of prototype self-propelled artillery based on the FT-17 chassis.

The first picture shows one of the previously featured prototypes, but this time the photograph has been taken from the side of the vehicle. 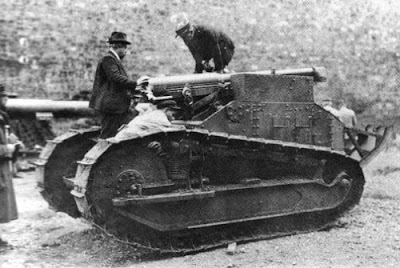 The second prototype is different from those already featured in that the armament is reputed to be a 149mm howitzer. The latter has been fitted with an armoured shield that offers some protection to the crew. 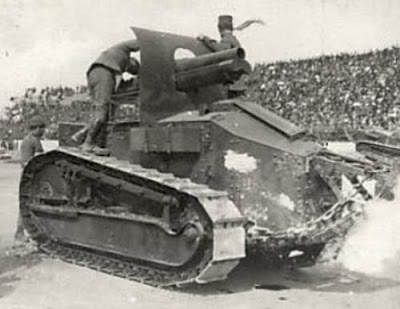 It is worth noting that none of these designs allow the armament to traverse more than a few degrees, and that half the designs have armament that faces towards the rear of the chassis. These designs give the artillery mobility, but not the ability to be used offensively.
Posted by Robert (Bob) Cordery at 18:00 5 comments:

THE TRUTH prints ... the truth?

Further to its recent article about self-propelled artillery that uses the FT-17 chassis, THE TRUTH (the official newspaper of the Soviet Peoples' United Republic) has printed the following photographs.

The first photograph shows a vehicle where the 75mm gun is mounted in a fixed position low down in the hull front. Whilst this would make it very easy to use the gun where the range is short and the crew needed to be protected by armour, it is difficult to understand how it could be used to provide traditional artillery support. 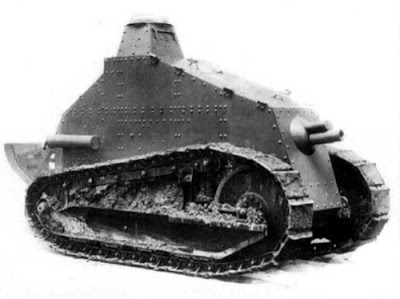 The second vehicle has obviously been designed to use the tracks and lower hull of the FT-17 to provide a means of moving a 75mm gun over difficult terrain. However, the fact that the gun faces towards the rear of the hull seems to show that it could not be used offensively as it could not engage targets as it advanced. 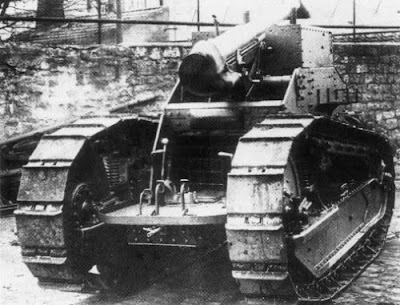 The third vehicle seems to combine the best aspects of both of the previous prototypes. Its gun faces forward, which means that it can be used offensively, whilst the crew platform at the rear provides some shelter to the crew on a fire-swept battlefield. 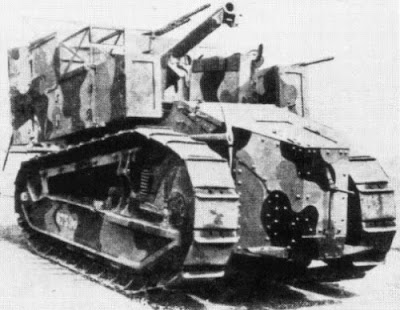 THE TRUTH did not provide any further information about these prototypes, and their country or countries of origin are unknown. Only time will tell if these prototypes are the progenitors of a whole new breed of self-propelled artillery.
Posted by Robert (Bob) Cordery at 08:33 4 comments:

The latest issue of THE TRUTH, the official newspaper of the Soviet Peoples' United Republic, has published an as yet unsubstantiated report that they have obtained pictures of several self-propelled artillery prototypes based on existing FT-17 tank chassis.

The article does not give any indication where these photographs were obtained nor which country has built these prototypes. One can only hope that they will publish these photographs and further information as soon as possible.
Posted by Robert (Bob) Cordery at 15:43 No comments:

I have continued to add both fiction and non-fiction books to my Interbellum website.

So far all the fiction books I have added are ones that were written during the inter-war period, but I expect to include non-contemporary ones is due course. In the case of the non-fiction books I have selected those which were either written during the inter-war era or which mainly deal with wars, campaigns, and/or weapons from that time period.

The website is still in its early stages of development, and I still have lots of stuff that I can add to it in due course. At some time in the future I also intend to add pages that cover films that were either made during the inter-war era or that cover incidents from the 1920s and 1930s.
Posted by Robert (Bob) Cordery at 14:57 No comments:

A Pain in the Bolkans 4

Dateline: Geneva
By our Correspondent at the League of Nations.

Amidst unprecedented scenes of chaos and mayhem in the chamber today, two national delegations resorted to physical violence and had to be removed from the League Building.

Count Duckula, the Ainamor representative, had just risen to speak in the debate on the Scandanavian Pig Smuggling dispute when the gentleman from the Brobdingnag Union leaped to his feet and interrupted him with loud accusations of Ainamor atrocities against the Union in the just ended Royal Army exercises near the Union border.

Showering delegates with photographs which he claimed to be proof of his claims, Shishkebab Bey appeared to say that the Royal Army had made several incursions into Union territory and committed numerous offences including kidnapping and assault of women and goats from border villages, sniping at Union Gendarmerie border guards and turning the Union flag upside down outside town halls and other official buildings.

This was greeted with howls of laughter from Count Duckula and the singing by his assistants of the Ainamor National Anthem " Cummen havago iffudink yurhardenuff ". Almost at a point of apoplexy, Shishkebab Bey then denounced the Ainamor Royal Aviation Corps for having bombed the rail junction at Cheyssac, destroying several buildings and killing a number of villagers.
Cheyssac in ruins.


At this point, Count Duckula stated that the accusations were totally without foundation, but that if the RAC had truly intended to bomb Cheyssac then rather than merely damaging it, the village would have been totally wiped from the map. Whereupon Count Duckula went down under an assault from several Union delegation members, including Shishkebab Bey wielding a large, traditional but not ceremonial knife. An unseemly brawl between the two missions only ended when police carried the two parties from the building.

The Union delegation left for Boughre without comment. Count Dukula was last heard screaming abuse at the Bey and shouting " This Means War! ".
Posted by Monsewer Crapaud at 20:33 No comments:

One of the books I found on my shelves whilst I was searching for sources to add to my Interbellum website was THE FIGHTING TANKS 1916-1933. It was published in 1933 and its authors were Major Ralph E Jones (Infantry, US Army), Captain George H Rarey (Infantry, US Army), and First Lieutenant Robert J Icks (Infantry Reserve, US Army). Besides containing lots of interesting data (including the approximate numbers of tanks in the World's armies) and photographs, it had a diagram that showed the comparative size of several different interwar tanks. 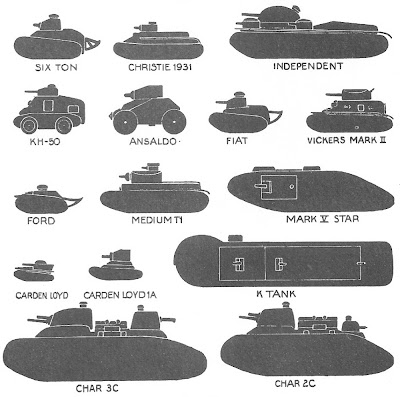 I have begun to add some more pages to my Interbellum website.

These new pages will deal with fiction and non-fiction books that people interested in the interwar era might find useful. The fiction books will hopefully inspire ideas for new imagi-nations (or the development of existing ones) and the non-fiction books will cover data about various real armies, equipment, and weapons as well as some of the more obscure wars.

The website is still very much in its early stages of development, but I hope to add stuff as and when I can.
Posted by Robert (Bob) Cordery at 11:52 No comments:

Hinterland Miniatures, who I've not heard of before, have released a range of female Hussars, which might be of interest to you Eastern Europe types.

There are pics of other figures toting bolt-action rifles on the site and I must say I'm quite impressed.
Posted by Anonymous at 17:51 3 comments:

Painted a company of 9 Vickers export tanks last week (T26a) - destined for the Slobenian front. The twin-MG turret platoon is shown below:

I'm not that impressed with the finish - the moral of the tale being, don't paint a company of Sci Fi mech armour then get carried away when you are tired and a bit slap happy with the brush.

Mind you, they are 15mm SDD models and a bit light on detail/crisp lines so can't beat myself up too much.

They're fine for the table just now, but I think I'll need to revisit them with a Polish style camo.

Interbellum at The Too Fat Lardies

Too Fat Lardies - are currently having a sale across all of their products. Well worth a look, but for Interbellum gamers the Summer Specials have a lot to recommend them at only £3.50 (link) each.

The 2006 Summer Special is of special interest as it includes several articles about colonial warfare in the Interbellum period.
The same issue also includes:
Plus all the usual Lardiness. Even if you don't play the Lardy rules, the articles, scenarios and how to's, all make up a great read in their own right.

Today's issue of THE TRUTH, the Soviet Peoples' United Republic's official government newspaper, reports that the famous aircraft designer General Rippov died some days ago as a result of a freak accident.

General Rippov was cleaning his personal sidearm when it went off accidentally, shooting him three times in the back of the neck. The police officer investigating the incident – Major Alexei Nikasov of the People’s Security Bureau (PSB) – stated that 'It is incredible that such an experienced officer would clean a loaded gun, and that he would think it safe to wave it about in the way he must have done in order to inflict the injuries he suffered.'

Major Nikasov made no comment about a rumour that the gun must have been loaded with very unusual bullets as it is thought that three different calibre rounds were recovered during the autopsy.
Posted by Robert (Bob) Cordery at 10:26 No comments: