The Shape of Things To Come


History is full of "what ifs", I'm sure you've all come across them in your reading on whatever it is that floats your wargaming 'boat'. You're sat there reading whatever and into your head pops the question "What if that had; gone wrong/hadn't happened/gone differently"? Sometimes they are minor ripples on the historical pool, other times they are veritable tidal waves. The 'Lost Message' that might have stopped the Battle of Gettysburg, or Hitler being executed following the 'Beer Hall Putsch' of 1923, instead of being imprisoned, both have their obvious impacts on history.

Take VBCW for example. Personally I don't think it would have happened they way it's been developed, but of course that's merely my opinion. How I see it, is that the point of departure (POD), would have been Edward's refusal to abdicate and his taking up Churchill's offer of forming a "King's Party". The BUF however was a rapidly declining force after 1936 and its participation would be minimal... but you have to have your 'bad guys' I suppose.

Any resultant Civil War (if it had even actually come to that) might have resembled the English Civil War in its make-up. Quite possibly the 'Parliamentarians' would have seen Socialists and Communists become the modern day equivalents of the 'Diggers' and 'Levellers' and other radicals that became active within their military. It's quite possible that a potentially victorious 'Royalist' regime might have gone extremely right-wing, as seen in Loncraine's Richard III, but not in the BUF style, they had no political credibility or support.

The impact of a British Civil War in the 1930s would have been far more important than the Spanish Civil War, given Britain's position in the World. By 1936 Spain was the 'sick man of Europe', its moment in the sun ended by the Spanish American War of 1898. The messages taken from it; 'Tanks are only useful as infantry support weapons' by the British and French, and 'This seems to work well' by Germany, did have their effects on the subsequent campaigns of 1940, but other than that there was little impact on world events. Overall though the impact of the Spanish Civil War was that fear was spread, via the news reels of the war, of the concept of Total War.


In 1933 H.G. Wells's "The Shape of Things To Come" was published. While not his best work, it proved curiously prophetic. A war beginning in 1940, due to German-Polish tensions over the city of Danzig, is obviously perhaps the most uncanny.  Bearing in mind that we are talking 1933, Wells's conception of the World was somewhat different to what it would become. He saw the Germans as militarily weak (which they were in 1933) and the Poles as the aggressor, the Polish Government being itself a military dictatorship.

Italy is the main villain of the piece and with its allies; Bulgaria, Hungary and Albania embarks on a conquest of Yugoslavia. A Central European Alliance is formed between Germany, Italy and Austria, and despite the British, French and Czechs attempting to broker a peace, the war continues. Britain and the U.S.A. adopt a stance of 'impartiality', which produces a period of economic growth and prosperity for them, dragging them out of the depression.

Russia involves itself indirectly, supporting 'partisans' in the Polish Ukraine and encouraging Lithuania to seize disputed territory in Poland, like Britain and the U.S.A. it is likely that it grows economically and spreads its influence, rather than being involved and ultimately weakened, as it was in the real world. France had tried to broker peace, but finally is forced to honour its treaty commitments and declares war on the Central Alliance in 1943, as do Yugoslavia's allies; Romania and Czechoslovakia, becoming allies of Poland in the process.

The war on land and sea resembles that of the Great War, with trench lines and periodic offensives, of limited result. Poison gas, 'slime pits' (sections of chemical 'moat') and barbed wire predominate on the respective 'fronts' and guerrilla warfare in the difficult terrain areas. France invades Italy, but is halted at Milan. At sea the centre of the war is the Mediterranean, where the Central Alliance attempts to break the 'bridge' between French North Africa and France.

It is in the air where the war is being fought however. The watch word is that 'the bomber will always get through' and huge devastation is wrought on cities by the opposition's bombers. There are air assaults, or 'raids' by forces against targets otherwise protected by the heavily fortified front lines, which eventually results in the abandonment of the concept of the front line entirely, in favour of chains of 'redoubts' or 'fortress towns'.


It all ends badly of course. The cities of those nations involved in the war become hell-holes, as those who aren't soldiers, essentially become either factory workers, or a slave labour force, which is constantly engaged in digging bomb shelters, repairing or building defences and of course the digging out of areas flattened by aerial bombing. Food becomes scarce and rationing becomes the norm too, in ever-dwindling amounts.

Britain and the U.S.A., whilst initially benefiting from their war-profiteering, suffer economic collapse as their customers default on their war-debt payments, resulting in mass-unemployment, social unrest and eventually civil war in effect. Then 'Maculated Fever' aka 'The Wandering Sickness' appears, whether it is 'germ warfare' or just a natural organism, that is able to take advantage of a malnourished and run-down world population is anyone's guess. Regardless however, the world's population is halved by the time 1960 comes.


Wells then illustrates the 'World of Tomorrow' of 1960, a world where unburied, and in some cases partially gnawed, skeletons, lie in the streets of abandoned towns. In some areas a formal local government structure still exists, while in many others unpaid soldiers, or local levies, having no work to return to, have set themselves up as a ruling elite. There are no forms of national logistics in operation; no oil being produced, no vast factories at work, no means of food distribution. A new Dark Age descends on the world, as what planes, ships and vehicles survive, become useless, as there is no fuel for them.


Okay the book itself is a bit dull and is written as a 'History' from some future point, where all is happy and rose-coloured under the World Government. If I had to recommend bits of it, I'd just say read "The Last War Cyclone 1940 to 1950" and as far as you can stand after that, up to the start of Book 3. It doesn't offer excessive detail, but provides the general concept of the Second World War, as Wells imagined it in 1933. The film itself can be watched on You Tube and is not bad for depicting the 'horror of war' at the start and there's some really cool footage in the first half an hour or so.


From the Wargaming perspective it's potentially brilliant however, particularly if you're a fan of Inter-War vehicles and aircraft. While there's no reason you can't use them, the Panzers, Messerschmitts, Stukas, Cruiser tanks, Hurricanes and Spitfires, can be ignored and instead the Vickers Mediums, Hawker Furies, Heinkel 51s and other 1930s stuff can be introduced in their stead. If you play the Great War, you can supplement your collections with the above, as largely the equipment and uniforms in use in 1918, were still in use in 1936. Britain remains uninvolved in the book, but in the 1936 film, it is one of the nations at war and the action is centred on 'Everytown'.


If you are 'Dieselpunk' or 'Decopunk' at heart, it's a bit of a dream come true. The U.S.A. militarises, but does not become involved in the war (although it does fight a brief war with Japan). American planes, tanks and weapons supply both sides (as do Britain's). The potential for the establishment of 'air mercenaries', a la 'Sky Captain' or the real world 'Flying Tigers', as well as Pulp Era adventures set on the periphery of a European War, are also there too.

You can take what you will from the setting offered, be it an alternate Second World War, a background to Adventure or 'Back of Beyond' style games, you could even use it as an alternate timeline for a Post-Apocalypse World, without the radiation of a nuclear holocaust. If you wished, the 'Wandering Sickness' could even be the beginnings of the Zombie Apocalypse. All of the potential is there, as viewed from H.G. Wells's view of the future in 1933. 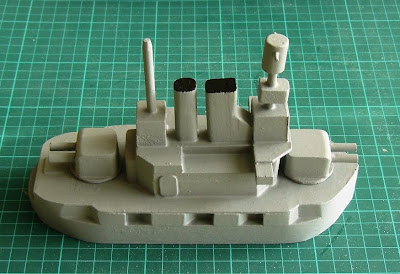 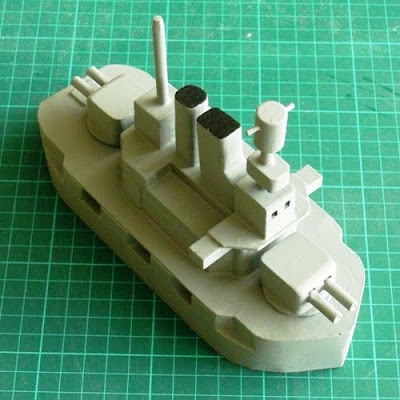 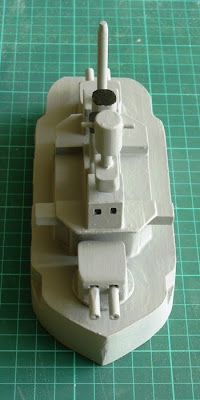 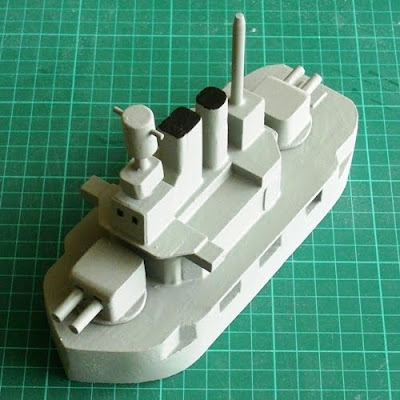 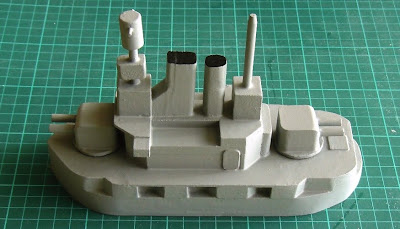 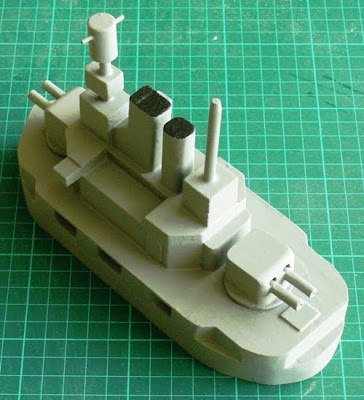 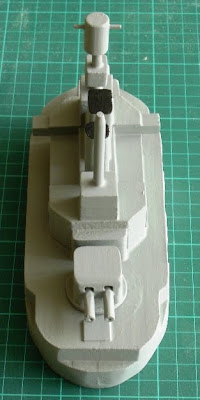 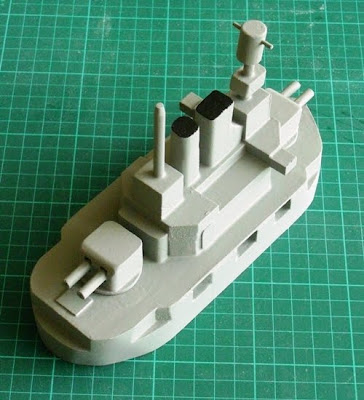 I painted her in all over light grey, and I think that it looks quite effective and 'right' for the period.
Posted by Robert (Bob) Cordery at 15:51 7 comments:

I am now of an age where people tend to find it difficult to buy me birthday presents because they assume that I already have everything that I need ... but today I received one from my old friend Tony Hawkins that not only surprised me but also gave me tremendous pleasure! Tony knows that I am a long-term devote of Hergé’s Tintin books (I blame Hergé for my ongoing interest in the interwar era and little known conflicts between small nations) and he sent me a copy of Michael Farr’s book about Professor Calculus. 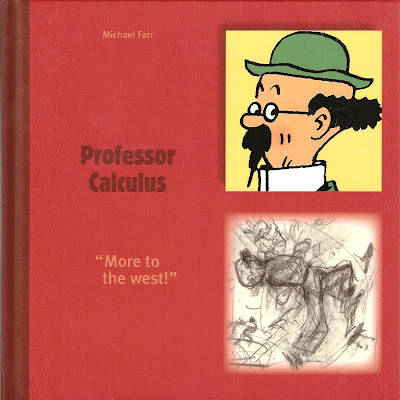 I knew that Hergé based the character Cuthbert Calculus on the famous Swiss scientist Auguste Piccard … but until I read this book I had not realised how similar they were in so many ways. I understand that Michael Farr has written books about all the major characters who appear in the Tintin books … and I hope to add some of them to my collection in the very near future. Many thanks Tony; your present helped to make my birthday a special one!
Posted by Robert (Bob) Cordery at 15:14 1 comment: